This is a delicious soup using late-summer vegetables. On the face of it, the ingredient list may look a little ordinary, but the spices are the key — don’t skimp on those! 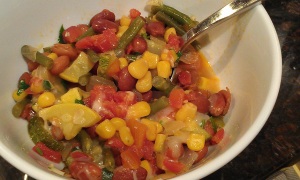 It’s one of the first recipes I ever pasted in my cookbook, but I never made it until now. I clipped it from The Atlanta Journal-Constitution and even wrote the date next to it: August 19, 1993. It’s originally from “The Greens Cookbook” by Deborah Madison, who was the first chef at Greens, a well known vegetarian restaurant in San Francisco — and it turns out the stew is pretty well known, too.

I didn’t realize it was so well known until I was making it and poked around a bit to see if it was anywhere online. I also didn’t realize the origin of the name. Zuni refers to the Pueblo Indian tribe, and at least one article I read said the ingredients involve what is an Indian grouping of corn, beans, and squash.

One note about the tomatoes. The recipe calls for a pound of charcoal-grilled tomatoes, pureed. I wasn’t able to do that, so I just used a can of diced tomatoes and drained them. It worked fine, but I’m sure the charcoal flavor would have been far more delicious.

Heat the oil in a pot and saute the onions over high heat until translucent. Lower the heat and add the garlic and spices, and stir everything together. Add a little liquid from the beans if needed.

Cook until the onions begin to soften, about 4 minutes, then add the tomatoes and stew for 5 minutes. Stir in the squash, corn, green beans, and pinto beans and enough of the liquid to make a fairly wet stew (you may need to add water if you run out of liquid). Cook slowly until the vegetables are done, about 15-20 minutes.

Taste the stew and adjust the seasoning. Stir in the chopped cilantro, then garnish with cheese and cilantro leaves.

This thick curry is a great way to use up any leftover vegetables. I had a bunch of cut vegetables leftover from a weekend cookout, and I was able to use them all. I found the recipe on one of my favorite food sites, LoveFoodHateWaste.

I recommend scaling the recipe based on how many vegetables you have to use. Serve it over rice, and bon appetit.

675g leftover vegetables of any type (I used zucchini/courgettes, eggplant/aubergines, bell peppers, cherry tomatoes, and even celery. Other ideas include potatoes or sweet potatoes, carrots, broccoli, baby corn, cauliflower, and green beans.)
2 tablespoons canola/rapeseed oil
1 onion, peeled and chopped
4 garlic cloves, peeled and chopped (yes, you do want to use this many)
100g block creamed coconut*, diluted in 200ml of warm water
4 Tbsp. red curry paste, such as Madras or Masaman
14 oz./400g can chopped tomatoes
1 1/2 tsp. salt
Cilantro (coriander sprigs) to garnish, if available (don’t worry if you don’t have any on hand)

If using potatoes, boil them in salted water for 10 minutes, then drain and set aside. Chop them and all the vegetables in big chunks and set them aside.

Heat the oil in a large pan, add the onion and garlic, and cook for about 5 minutes, stirring occasionally. Add a large splash of the coconut “water” and curry paste and cook, stirring, for 1 minute. Add the tomatoes and cook until mixture resembles a very thick paste.

Add the vegetables, salt, and the remaining coconut water. Bring to the boil, cover, and simmer for about 15 minutes. Remove the lid and cook until the liquid is evaporated and the vegetables are tender. Ganish with cilantro, if you have it, and serve atop basmati rice.

*I was new to creamed coconut when I began this recipe, but I found it easy to use and with a fresher coconut flavor than coconut milk. Here is a great explanation of coconut ingredients.

I know — this is yet another salad recipe, but it’s the summer and I just want cool, simple dinners these days. I got this recipe from the back of an artsy greeting card with a huge peach on the front in Atlanta about 10 years ago. I put it in my recipe book and never got around to making it until last night. The result was so delicious that it was another case of, “Why on earth did I wait so long?”

Everything works together really well here — the peaches freshen up the lentils, the balsamic brings out the flavor of the fruit, the basil works well with the feta. This is a great salad to serve for lunch, maybe with crispy crackers. On its own, it makes a wonderful meal for vegetarians and those on low-GI and Weight Watchers plans — especially if you can find fat-free feta.

One more thing — this is a great way to use up leftover feta you may have in the fridge. Just adjust the proportions as needed. 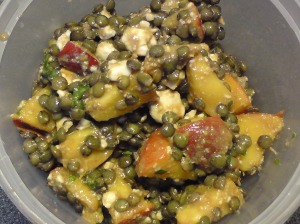 Boil a pot of water and add the lentils. Cook about 10 minutes or until the lentils are al dente. Drain and set aside.

When the lentils have cooled, combine the remaining ingredients in a bowl. And add the lentils and mix gently to combine.

*French Puy lentils and green lentils retain their shape when cooked, so they’re good to use in recipes like this one. Click here for a list of different kinds of lentils.

This is an easy, no-cook, creamy sauce for pasta that works perfectly for these hot summer nights. The pine nuts (pignoli) add some crunch and protein. You can use either fat-free or regular dairy ingredients, and you can serve it atop any kind of pasta you like — although I favor linguine for this one.

The raw garlic is strong, so leave it out if it’s too much for you, but I personally loved the kick it added to the sauce.

Set a large pot of water to boil for the pasta. Put the rest of the ingredients in a blender and mix until combined.

Cook the linguine in the water. When it’s done, drain it, then quickly whiz the sauce ingredients in the blender again. Arrange the pasta on plates and pour the sauce on top. Sprinkle a small handful of pine nuts on top, along with some more oregano. Serve immediately.

Here is a quick and easy way to prepare those beautiful and meaty portobello mushrooms. The only part that takes a while is the marinating, but you can get other things done in the kitchen while you do it, including preheating the oven. You won’t believe how good this tastes.

This can also be done on an outdoor grill.

Once cooked, the portobellos can be sliced into long strips for a vegetable side dish, a topping for salads and risotto, or a gourmet addition to a toasted sandwich. You can also put the mushroom caps between two hamburger buns to create a new favorite of mine — portobello burgers.

You can play with the proportions for the marinade, but I favor one part red wine vinegar to two parts olive oil.

Gently rinse the mushrooms and pat dry with a paper towel. Mix the other ingredients together well in a measuring cup, then pour into a large bowl. Add the mushrooms and leave to marinate for about half an hour, turning every so often to make sure all sides can sit in the liquid.

Preheat the broiler (I set it to 225C/460F degrees). When the broiler is ready, place the caps rounded side up on a baking tray.

Broil for 2-3 minutes, then turn and cook for a further 4-5 minutes. Remove and serve immediately.

The recipe for a good, basic stir-fry sauce has eluded me for a while, but I have finally found one I like. It takes just a couple of minutes to make and has just what I want in a sauce — something that clings to the ingredients and gives it a spicy, salty, and slightly sweet Asian flavor.

This is perfect for those bags of pre-cut stir-fry vegetables you see in the produce aisle of the supermarket. Add bean sprouts, edamame beans, or tofu for a great vegetarian meal, then serve it all on top of rice or rice noodles. It is for me the perfect weekday meal — quick and nutritious, with enough for leftovers (to save time the next day!).

I adapted the recipe from one I found at about.com.

Place the first five ingredients in a saucepan over medium-high heat. When it begins to bubble, reduce the heat slightly and add the cornstarch mixture and garlic. Stir until the sauce thickens slightly. Taste and adjust the flavors as needed.

How to use it:
Make the sauce as you cook the rice and before you start cooking the vegetables. When you’re ready, stir-fry the vegetables in a little oil. When the pan becomes dry, add a few spoonfuls of the sauce and stir to coat the vegetables. Keep cooking until the vegetables have softened but still retain some crispness. Add the remaining sauce and mix until everything is coated. Serve immediately over rice.