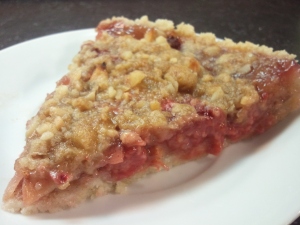 This is a great recipe I found last year in the magazine “Taste of Home.” It turned out well and wasn’t complicated — and it was a hit at dinner with friends the other night.

In a large bowl, combine flour and sugar; cut in butter until mixture resembles coarse crumbs. Stir in nuts. Press onto the bottom and up the sides of an ungreased 11-in. fluted tart pan with removable bottom.

For topping, in a small bowl, combine the flour, brown sugar and lemon peel; cut in butter until crumbly. Stir in nuts. Sprinkle over filling.

Bake 15-20 minutes longer or until filling is bubbly and topping is golden brown. Cool on a wire rack.

I’ve been craving smoothies so much recently, and making so many of them, that I finally no longer need a recipe for them. That’s a big achievement for someone like me who loves to cook but still relies on instructions to make a dish.

Essentially I have now hit upon a great base for any smoothie. While it may not be original or inventive, it’s nice to know I only need to have a few key things in the fridge in order to make any flavor smoothie I like.

Start with a quarter cup each of fat-free yogurt and orange juice for one regular serving. If the fruit you’re using isn’t chilled, then put a small handful of ice cubes in the blender along with the yogurt and OJ. (Using lightly thawed frozen fruit like berries is especially nice.) A spoonful or two of protein powder adds extra nutrition if you want it, and a swirl of honey (or agave syrup, my preference) adds sweetness if the drink still needs it.

There you have my perfect smoothie base. As for fruit, use whatever you like — that’s the fun of making these things. I often add banana because I like the touch of creaminess it lends the mixture. If I include other fruit, then I use half a banana. I have found a total of one serving of fruit works well with the amount in the base, but of course all of this is entirely up to your tastes.

Here’s the smoothie I made this morning — straightforward and delicious. 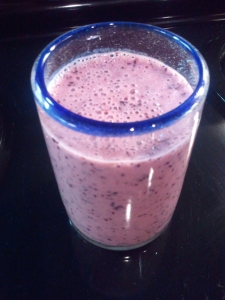 I’m back after a long absence, and I can explain. I’m pregnant and those food aversions hit me in the autumn, affecting my appetite in a big way. I didn’t know what I wanted to eat, other than fresh fruit and vegetables — and the odd vanilla shake. I certainly did not want to cook.

The due date is still about seven weeks away, and while the food aversions have mostly gone away, my appetite is still dictated by the baby. The other day I woke up and wanted nothing more than freshly squeezed, high-pulp orange juice for breakfast. But opening the refrigerator, I noticed a punnet of blueberries I had bought the other day and immediately knew what I wanted: a fresh smoothie. Here’s what I came up with, and it was delicious.

This was one of the first smoothies I ever made and I still love it. Just combine everything in a blender and process until smooth. Serves 2. 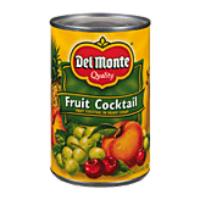 This recipe involved a lot of firsts, starting with the salad itself. I had never made one before. My mom makes an excellent fruit salad that I remember fondly from when I was growing up, and I wasn’t about to try to copy it. So I started with a recipe I already had on hand and adapted it based on what was available and what I wanted in the salad (and how much room we had in the fridge).

I had never cut open a whole watermelon before, nor had I ever cut fresh pineapple. Both were so easy and pleasing that I wondered why on earth I had waited so long to try them.

I served the fruit salad at my birthday party the other week and people really seemed to like it, so I’m guessing it’s good enough to share. 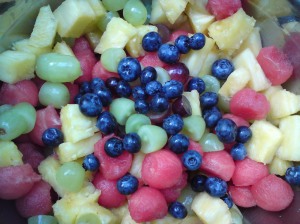 Use a melon baller to scoop out balls of watermelon, and place them in a large bowl.

To cut the pineapple, cut off the top and bottom, then stand it upright on a cutting board. Use a chopping knife to cut off the skin in thick strips, starting at the top and going straight down. Continue doing this until all the skin has been taken off, and use a paring knife to cut out any prickly knobs that are left behind. Then, keeping the pineapple upright on the cutting board, use the knife to cut off sections, leaving the core intact (discard the core later). Lay the sections down on the cutting board and cut chunks as desired.

Wash the grapes, cut each in half, and add to the bowl. For color, use more green grapes than red — maybe a ratio of 2 to 1.

Wash the blueberries and toss them in. Again, let color be your guide — add as many or as few as you think the salad needs to look good.

Drizzle agave syrup (or honey, if you don’t have agave) on top, then toss gently with a wooden spoon.

I think the recipe worked because of the nice mix of colors, the strong taste of each of the fruits, and the different shapes — but you could adapt it however you like. You could add cut strawberries for a burst of red, or cut sections of tangerine to add citrus. I avoided using apple or banana just because I wanted strong colors and tastes, but you could use them, too. (If you do use apple, dress the pieces with lemon juice before putting them in the bowl to prevent them from turning brown.) Other berries like blackberries would look spectacular, as would sections of kiwi. You could chop fresh mint and sprinkle it on top. Melons and mangoes don’t interest me so much, but they could also be a nice addition.