With fresh ginger, lime juice, apples, and a cinnamon stick, this soup tastes sweet and vibrant. It’s from the famous Moosewood Restaurant, so like many of their recipes it’s very healthy yet doesn’t taste like it. The recipe calls for pureeing the soup, but you can have a chunkier version by removing about 3 cups of the vegetables with a slotted spoon, pureeing what’s left, then stirring the vegetables back in.

Do give yourself plenty of time to prepare the vegetables and other ingredients. 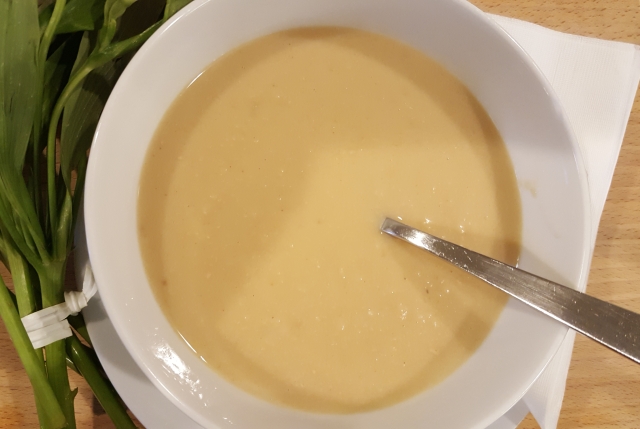 In a soup pot, saute the onions in the oil for about 8 minutes, until golden, stirring frequently. Add the cumin, turmeric, coriander, and ginger and cook for another minute.

Add the split peas, water, sweet potatoes, apples, cinnamon stick, and chili powder. Cover and bring to a boil. Lower the heat and simmer for 40 minutes, or until the split peas are tender.

In a bowl, combine the tomatoes, lime juice, and soy sauce. When the split peas are tender, add the tomato mixture. Remove the cinnamon stick. Puree the soup in a blender or food processor (or with an immersion blender, the easiest option), working in batches and adding more water if desired.

Return the soup to the pot and gently reheat. Serve topped with cilantro if desired.