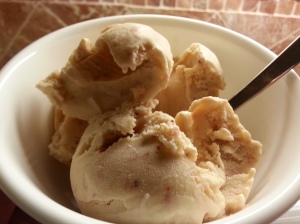 Strawberry ice cream was my favorite kind for a long time growing up, and it was the first kind I ever made in our ice cream maker. The recipe I used came from the user’s manual and tasted fantastic. I have made it several times since then. But this is not that recipe.

This one came from The Sunday Times in London back in 2004. It was actually a recipe from the restaurant Inn the Park and was featured alongside others from their menu. I clipped them all because they all looked delicious, but I never got around to making them.

When I saw the recipe in my cookbook the other day, I decided I would finally test it to see which one I liked best. The verdict: They are definitely similar, both creamy and full of the flavor of fresh fruit, but this one has the edge. The ice cream turns out pink all over (rather than white with pink here and there) and strawberry bits are in every bite. And this one is even creamier.

Served in a white bowl, it looked delectable — and was very quickly gobbled down.

Some notes:
– The amounts may seem small, but don’t be tempted to double them. The mixture will fill the ice cream maker as is.
– The strange weight amounts reflect the conversion from metric.
– Check out this recipe for a way to use up the leftover egg whites.
– Remember to freeze the bowl of the ice cream maker ahead of time!

In a small pot, place the strawberries and about a third of the sugar. Cook over medium low heat until strawberries are soft. Remove from heat and puree, then set aside.

In a saucepan, gently heat the milk and half the remaining sugar. Meanwhile, whisk the egg yolks and the rest of the sugar in a bowl until pale yellow. Pour the egg mixture into the milk on the stove and cook over a gentle heat, stirring constantly, until it coats the back of a spoon.

Meanwhile, prepare a large bowl of ice water and set aside. You will use this to quickly cool the custard mixture.

Remove the saucepan from the heat and stir in the heavy cream. Pour into a medium bowl and then set the bowl in the ice water until cool. Churn in the ice cream maker until very thick, then transfer into a plastic container and place in the freezer.